The realm of luxury fashion and haute couture would never be the same without Gucci being a huge part of it. What began in 1921 is today a legacy that continues to live on and inspire. As a symbol of artistic excellence, Gucci is known to run the gamut of designs that swing between its rich heritage and modern aesthetic. This sweet balance is how it has positioned itself to become a revered fashion leader. When it comes to popular Gucci shoes for men, each pair disguises itself as a yardstick of one’s personality and style. Modern men would agree that sneakers and slippers can very well make the same impact as an oxford or a loafer. From monogram details to metal accents, the label’s keen attention to detail lends its creations a distinctive persona that reinvents itself season after season.

The Luxury Closet is home to a vast collection of men’s shoes available in notable styles. Brace yourself and discover our exclusive edit of 6 must-have Gucci shoes for men.

We’ve seen them everywhere! From Bruno Mars and James Franco flaunting them on the red carpet to Shia LaBeouf donning them in Wall Street 2, the Horsebit loafers remain perennially modish. 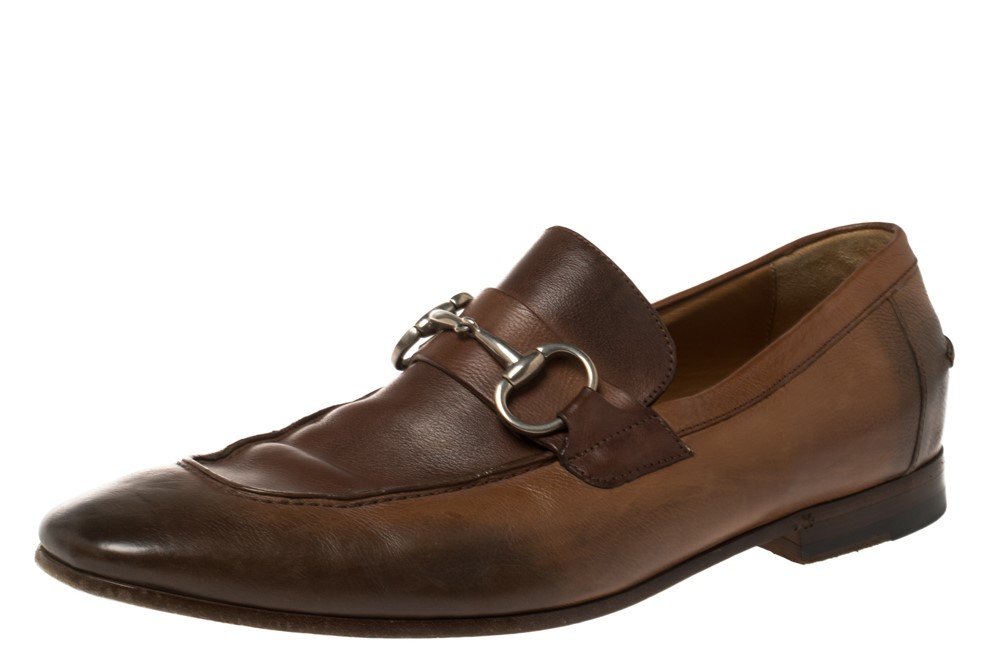 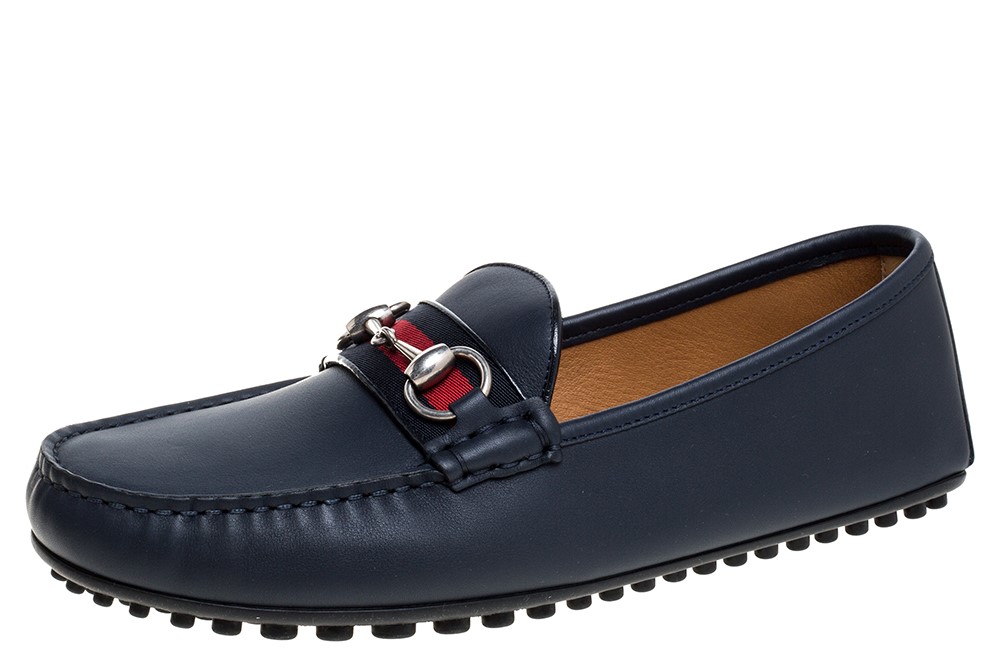 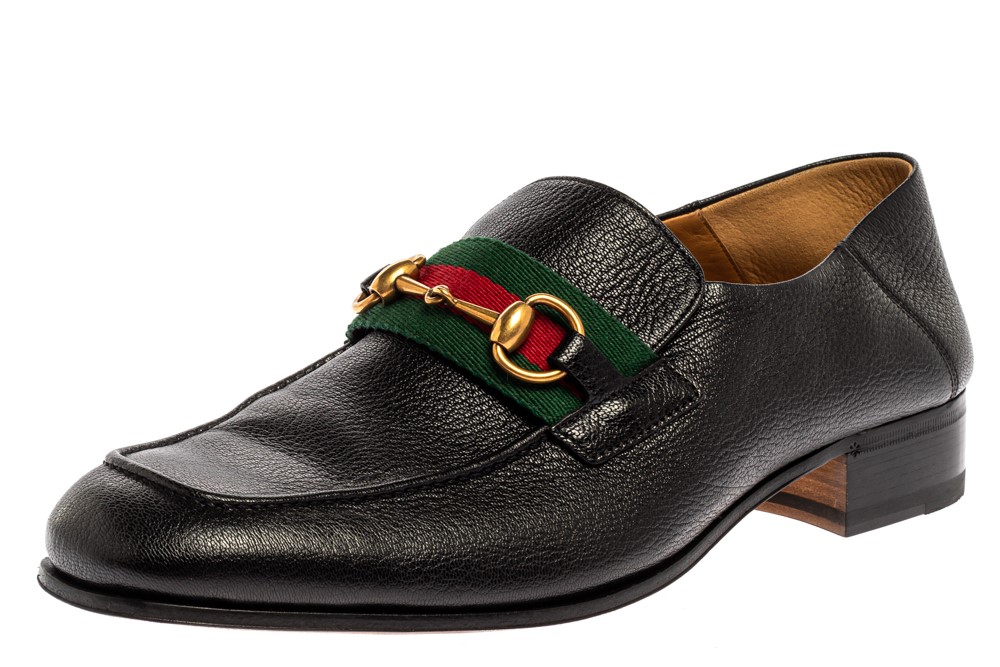 Epitomizing Italian luxury, Gucci’s Horsebit loafers have graced the glossy pages of several coffee table books and have acquired the status of being ‘revolutionary’ and ‘iconic’.  Aldo, Guccio Gucci’s son, first gifted the world these loafers in 1953, and even to this day, they are available in their original design. Timeless and classic, the Horsebit has forever stayed in vogue and will continue to. We’ve selected this pair in beige canvas and brown leather that boasts of a seamless construction playing on the signature elements- the Web stripe and the Horsebit buckle, together crowning the vamps. The neat stitching and comfort-laden insoles leave no stone unturned for you to make them yours!

Gucci sneakers are no strangers to luxe streetwear. It all began in the ’80s with the launch of the House’s very first luxury sneaker- The Gucci Tennis. Not only was it trendsetting, but in the years to come, it paved the way for the style to be considered as a ‘staple’. Today, under the creative direction of Alessandro Michele, the House dives into the depths of history to create contemporary pieces that radiate a youthful vibe, each infused with the magic of Italian craftsmanship. 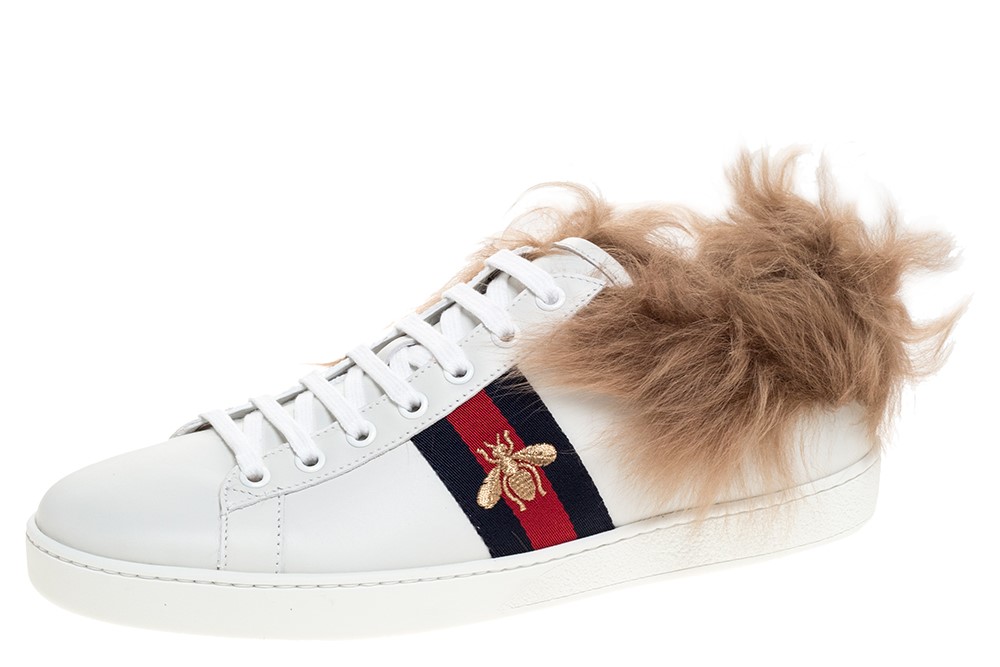 The Ace sneakers were part of the Maison’s 2016 collection. Distinctive and popular, they can be very well called ageless since they are incarnated in a vast array of ever-changing designs, colors, and embellishments. As a classic court low-top style, they are easily recognizable by the brand’s signature elements. We have chosen here a black-hued version of the Ace. The fine leather construction takes the form of round toes and lace-up vamps, while gold embroidered bees come alive on the iconic Web stripes. The ‘bee’ is one of the brand’s classical motifs displayed on several of its creations. The matching black-tone eyelets, impeccable stitches, and textured midsoles all make this pair worth appreciating!

The Gucci Jordaan, released in 2015, was an elegant addition to the brand’s family of timeless Horsebit loafers. It owes its name to an upscale neighborhood in Amsterdam that is home to several modern art galleries. 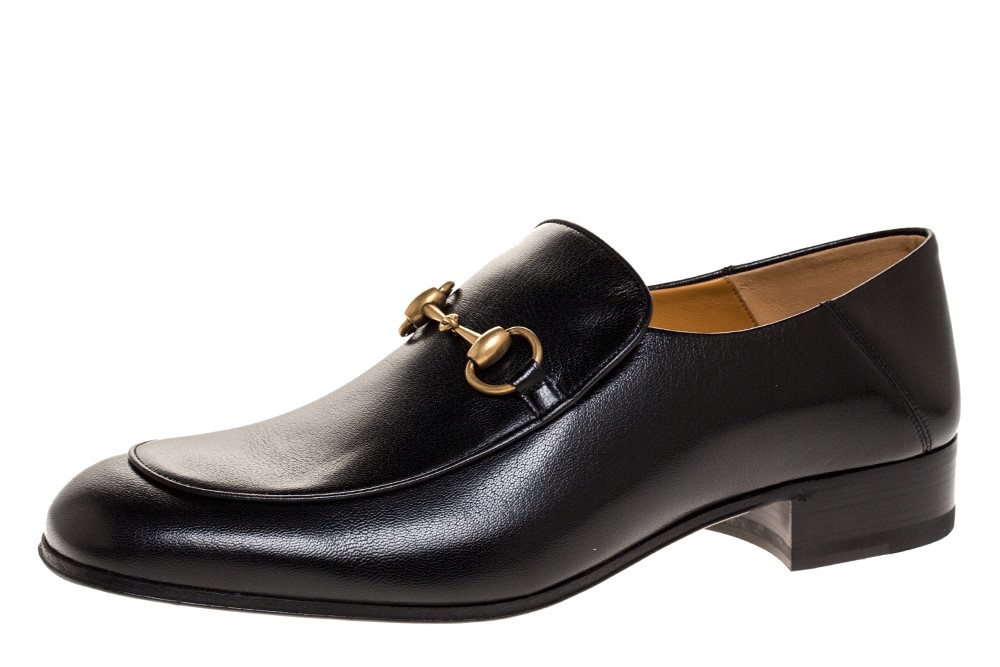 Characterized by its slimmer silhouette, it parades the instantly recognizable Horsebit details. The Jordaan has been manifested in several materials, from the signature GG canvas and woven raffias to satins and velvets, each exemplifying the brand’s age-old effortless style. We believe that every man deserves an exemplary pair, and thus, we’ve chosen this black Jordaan number for you. As a vintage shoe with a contemporary finish, it has been rendered in the finest leather and proudly showcases the equestrian sport-inspired Horsebit gracing the vamps. Sewn to perfection, it is investment-worthy and promises to add luxe elements to your closet!

Even before its release, the Gucci Rhyton garnered immense interest from the brand’s loyal fans. It was a part of Gucci’s Cruise 2018 collection and became much talked about owing to its rather bulky and oversized silhouette. Joining the bandwagon of the ‘dad’ sneaker trend, its chunky profile was hard to be missed, making it compete with the likes of Balenciaga Triple S. The Rhyton has been released in plenty of versions and colorways but what remains the same is the label’s quest for maximal appeal. While the Rhyton is designed with and without the iconic logo, the ones seen with the Web stripes are equal parts bold and trendy, and with their color blocking design, make an impact that is here to stay. 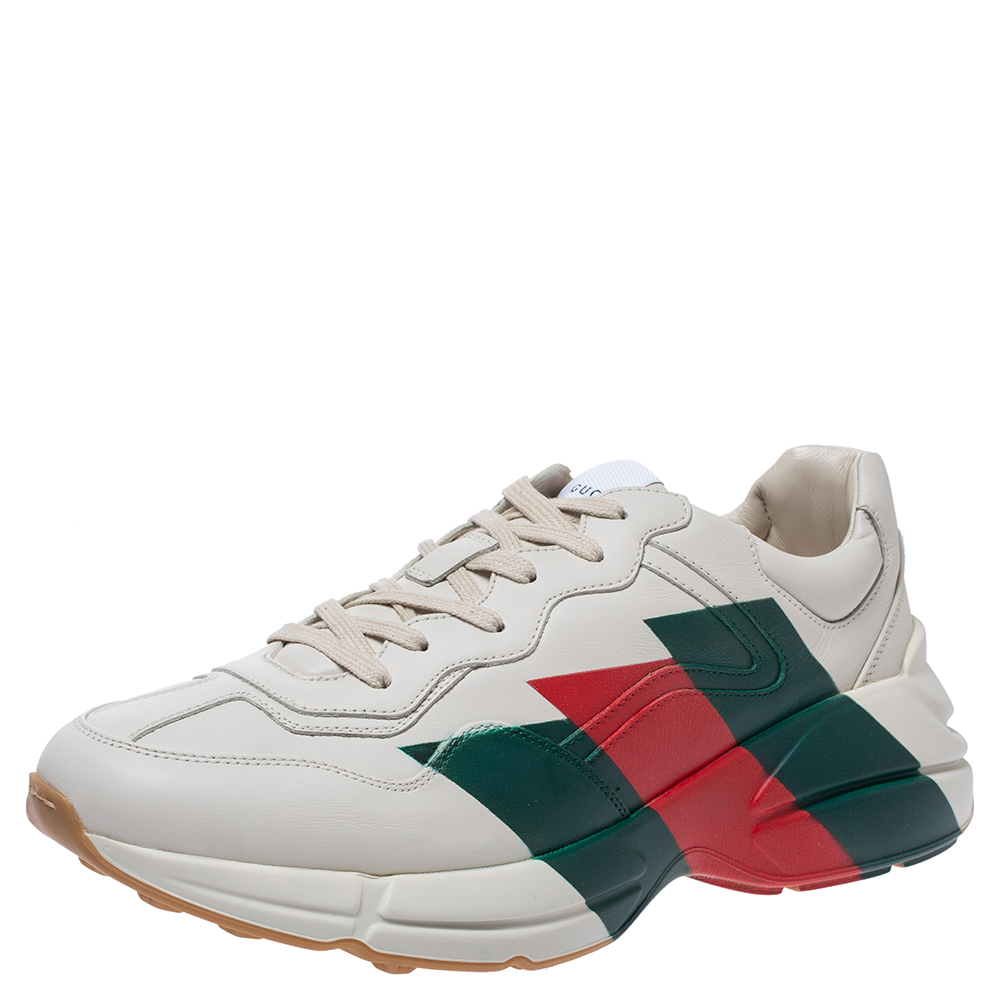 We particularly like these cream leather ones that feature clean uppers and tonal laces flawlessly blending with the neutral exterior. What ultimately stands out in these low-top sneakers is the archival Web print on the sides. While the tongues and the counters exhibit the signature branding, the thick soles offer excellent cushioning and a comfortable walk.

In the Fall of 2015, Alessandro Michele, Gucci’s then newly appointed creative director, gifted the world the Princetown! Treating the quintessential Horsebit loafers as blank canvases, he reimagined them into extraordinary designs that were anything but boring. From supple leathers and lush velvets to rich brocades and silky jacquards, the Princetown mules, with their backless silhouette, have taken myriad forms and grabbed a spot in the wardrobes of the fashion elite. Perfect conversation starters and versatile, they are easy to coordinate with your everyday wear, and the ones that come lined with fur offer a cozy experience that feels heavenly. The Luxury Closet is graced with several Princetown mules, but the ones that have caught our fancy are these black ones. Offering a dramatic spectacle, they have been curated in leather, endorsing the elongated toe and the open back. Gold-tone GG accents and the notable Web wreathes the vamps, while the soft fur lining envelops your feet in sublime comfort.

Gucci’s Flashtrek made its first appearance in mid-2018. Inspired by hiking boots, the Flashtrek was a lavish update to the already existing oversized and sturdy sneakers.  However, it is better suited for casual days out and city streets with its sporty luxe look. While the hulk-like design incorporates a chunky sole, the uppers are usually done in a combination of materials and detailed with metal lace hooks. The Flashtrek has also been released with crystal-embellished straps as well as bright reflective fabrics and luminous soles, each playing on the label’s youthful undercurrent. Taking us back to the arcade games of the ’80s, the Gucci logo in SEGA’s graphic font makes its presence felt on the tongues. The label details also feature on the front toe base and pull tabs on the counters. 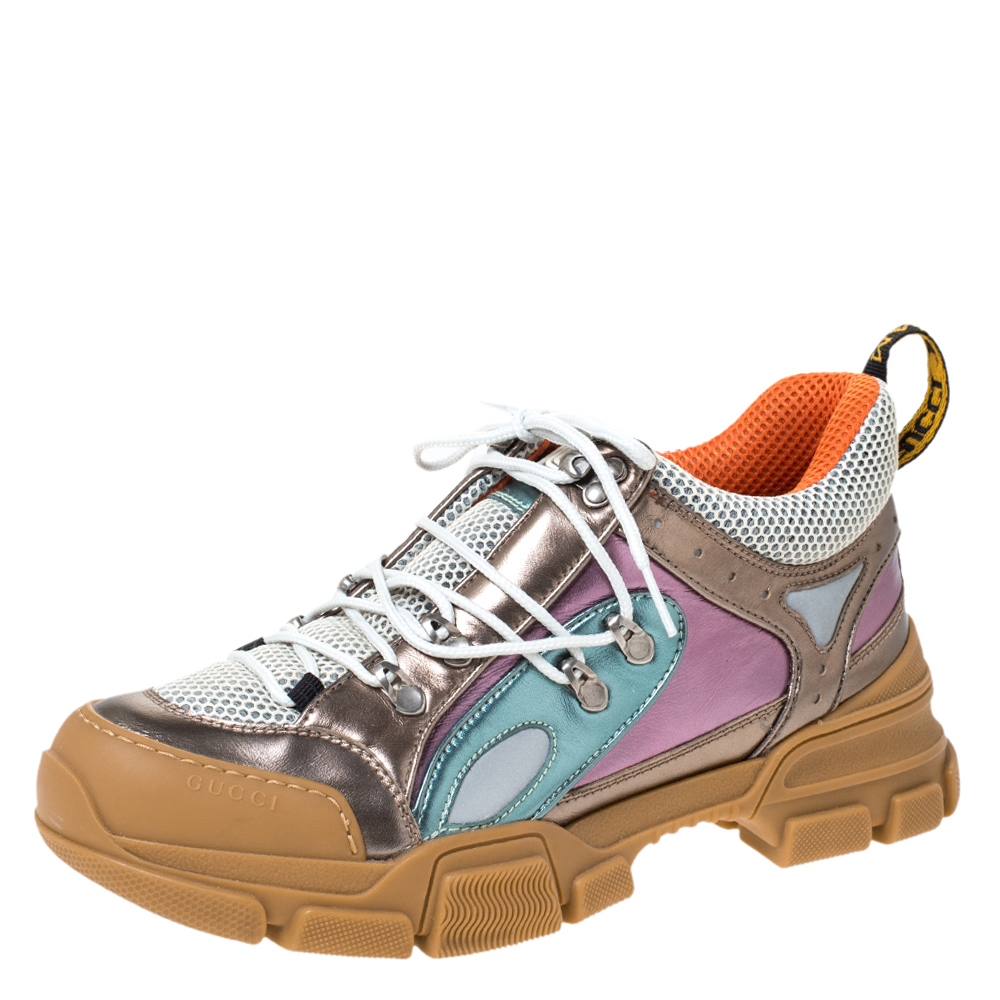 In a sea of colorways and designs, we’ve liked these particular Flashtrek sneakers that manifest a metallic construction consisting of leather and mesh uppers, white lace-ups with silver-tone metal hooks, and the SEGA-inspired font on the tongues. The statement-making pair is exceptionally comfortable with its durable rubber soles and easy to team with most of your casuals.

Shoes from Gucci are a testimony to the House’s vision of creating pieces that will stand the tests of time. As one of the most desirable luxury brands, it has continuously broadened its horizons and presented the world with something new to witness and appreciate. Dive into our deep sea of popular Gucci shoes for men and explore all that the brand has to offer! 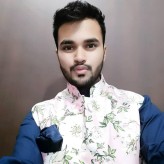 Ishan is a passionate writer who hopes his writing will one day inspire people and change lives. A fashion enthusiast and lover of all things fashionable, he has a penchant for shoes and enjoys indulging in ceramic art and pottery as much as playing the piano. A pet lover and an optimist at heart, he feels life will always stay beautiful as long as every raindrop brings hope.